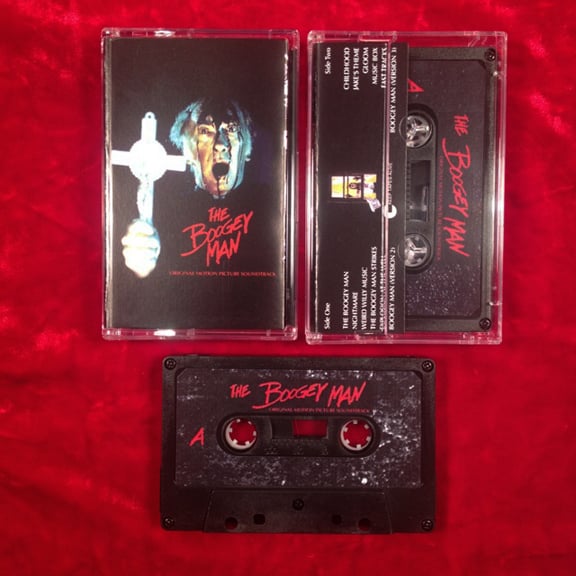 by The Boogey Man (OST)

Long out of print Original Motion Picture Soundtrack for Ulli Lommel's 1980 slasher THE BOOGEYMAN composed & performed by TIM KROG & Synthe-Sound-Trax. A must have for dark synth soundtrack fans ala John Carpenter and the likes.

"A classic slasher from the eighties, The Boogeyman is crazy even by the standards of other classic B-movie horror flicks. The plot is confusing to say the least, childhood trauma, a young girl and her brother, a murdered mother, killed while having sex, a mute child grown up to be a knife hoarding mute, living with the seemingly well adjusted sister, terrifying reflections in mirrors, eventually painted black, a priest impaled by multiple blades, possession, levitation. It’s actually a pretty fun movie, but it is NUTS.
The soundtrack is a doozy though, the classic sort of Carpenter style creep fest of the time, actually quite reminiscent of what might be THEE greatest horror score EVER (and one that has inexplicably not been reissued yet), Phantasm!
Composer Tim Krog offers up ominous sprawls of squiggly synths, dense swaths of kosmische creepiness, twisted sound effects, some Halloween like melodic themes, moody organs, dark drones and moody ambience, for a batshit movie, the score is actually pretty fantastic, lovely and terrifying in equal measure, swirling atmospherics laced with cool backwards psychedelia, stately minimal melancholia, some far out WTF electronics, and a main melodic refrain that after a couple listens could definitely join the horror score pantheon of classics like Friday The 13th, Halloween and again, Phantasm"